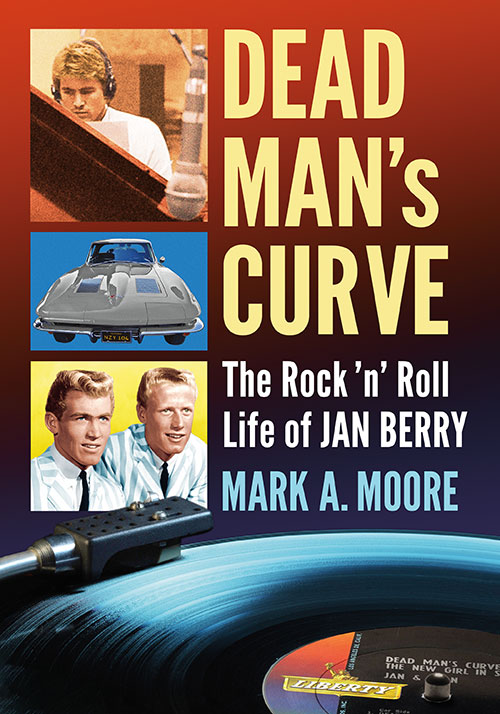 RALEIGH, NC – Summer 2021 – A new book from an award-winning author chronicles the highs and lows of the hard-driving, fast-living Jan Berry. From the birth of Rock ‘n’ Roll to major chart success while still in high school, from the peak of fame with “Surf City” to the prophetic nightmare of “Dead Man’s Curve,” Jan’s life story is compelling and brutal.

In Dead Man’s Curve: The Rock ‘n’ Roll Life of Jan Berry ($49.95/$29.95 McFarland & Co., Summer 2021), author Mark A. Moore taps his years of research to illuminate the complexities of Jan’s dual life—from grueling hours in Hollywood’s finest recording studios, road gigs, and personal appearances to navigating his way through college at UCLA and medical school at the California College of Medicine.

Headstrong and charismatic, Jan thumbed his nose at authority, made his own rules, and lived his life on the edge. His candle burned brightly at both ends, fast meeting in the middle. In April 1966, at the height of his music career and during his second year of medical school, his world crumbled in an instant. After gaining a reputation as one of the best music arrangers and producers in Hollywood, with 16 Top 40 hits as an artist (including seven Top 10), and more than 20 chart records as a songwriter to his credit, Jan suffered brain damage and partial paralysis in an automobile accident that nearly killed him. He was 25 years old.

“Jan Berry was a driven, self-assured controller,” says Moore. “Intellectually, from an early age, he was on a plane well above most of his peers. As part of a cadre of close-knit musicians and producers who defined the nascent California Rock scene, Jan made sure things went the way he wanted them to go, socially and creatively. His demeanor and personality drew those around him like moths to flame. His closest friends and creative associates marveled at his abilities, acknowledging him as a ‘good guy’ they liked working with and being around who could also be strict and demanding.”

“After Jan’s car accident,” says Moore, “his ego remained intact, but his personality changed. He became more pliant. In the early days of the post-accident era, he suffered profound depression. His mood ranged from hostile and belligerent to an eagerness to please. He suffered from a severe impulse disorder that constantly threatened his musical renaissance and the best efforts of those trying to help him. He struggled to acknowledge his new limitations but as the years progressed, he kept striving to better himself musically and personally. His left-brain injury eroded his ability to communicate, resulting in bouts of rage and frustration. Yet his knowledge of and capacity for music remained intact, including his ability to read and write pitch notation. His residual capacity for music gave him a lifeline, something to live for, to help pull himself out of the darkness.”

Moore has been researching Jan Berry’s life and career for more than 20 years. He served as consulting historian for “Jan & Dean: The Other Beach Boys” on the A&E network’s Biography series (2002). His book The Jan & Dean Record was published in 2016. His other published works on the subject include liner notes for Carnival of Sound (Rhino Handmade 2010), the Capitol Records digital reissues of the original Jan & Dean catalog (2011), Second Wave (Jan Berry Memorial Edition, Rainbo 2004), and various articles in Dumb Angel, Endless Summer Quarterly, and the official Jan Berry website.

For more information and to see the book’s Table of Contents, visit markmooreauthor.com and the official Jan Berry website: jananddean-janberry.com. View the promo video on YouTube and download a high-resolution image of the book cover.

Print and Internet media may request a digital review copy of the book online from the publisher.