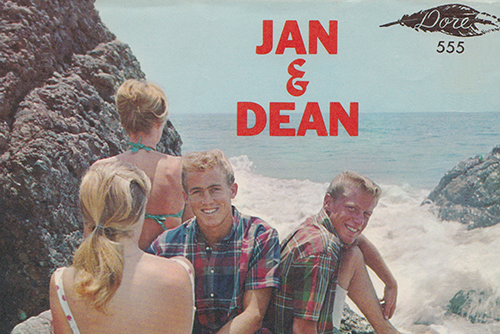 JAN BERRY — A SELECTED TIMELINE
By Mark A. Moore
Author of The Jan & Dean Record

• May 1960 — Doré released “We Go Together.” With the picture sleeve for “We Go Together,” the public imagery associated with Jan & Dean began to reflect the Southern California beach culture.

• October 1960 — Jan & Dean appeared on the cover of Movie Teen Illustrated as part of the magazine’s feature article on the duo, “Jan and Dean Invade Malibu.” They showed up for the spread in a white rag-top T-Bird, and the cover photo was shot at La Costa Beach. The national teen rags and local press had begun tying Jan & Dean to Southern California beach culture as part of their everyday lifestyles. Press articles mentioning their personal interest in surfing, cars, and drag racing would continue through 1961 and 1962.