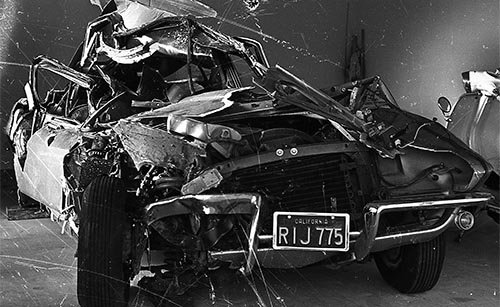 • January 1966 — Liberty Records released “Batman.” Jan & Dean’s “Batman” single and Album were a celebration and spoof of the Batman television series starring Adam West and Burt Ward. The show took a campy “Pop Art” approach to depicting the Caped Crusaders. Like Jan & Dean’s On the Run pilot, Batman was a product of ABC-TV and 20th Century-Fox.

• February 1966 — Production wrapped for On the Run, Jan & Dean’s television pilot developed by ABC-TV and Ashmont Productions. Directed by William Asher with a cameo appearance by Elizabeth Montgomery. An Ashmont Production in association with 20th Century-Fox Television, Inc. The screenwriter was Ruth Brooks Flippen.

• March 1966 — Jan & Dean performed at the The Dome in Virginia Beach, Virginia.

• April 1966 — Jan & Dean performed at Wedgewood Village Amusement Park in Oklahoma City, Oklahoma. This was the final concert of the duo’s original era.

• May 1966 — After a period of semi-consciousness, Jan began trying to speak again in early May.

Jan is Released from the Hospital

• June 1966 — In mid-June, Jan was released from the hospital at UCLA Medical Center and transferred to the rehabilitation facility at Cedars-Sinai Medical Center. He underwent physical therapy and speech therapy at Cedars and other facilities. Jan worked with renowned speech pathologist  Vivian Sheehan and aphasia therapist Maurice Sklar, among others.

• June 1966 — Sandy Ward, a young  psychiatric technician who had connected with Jan while he was in the hospital was hired privately by the Berry family to continue working with him.

• August-November 1966 — Dean Torrence began to release new music in a promising but ultimately unsuccessful effort to keep the Jan & Dean name alive while Jan recovered from his automobile accident. Dean’s releases on the J&D Record Co. and Magic Lamp labels were halted by Screen Gems for breach of contract, including the original mono version of the Save For A Rainy Day LP. Jan Berry’s and Jan & Dean’s pre-accident contracts with Screen Gems remained in effect, and the company still presided over the duo’s music career. Thus Dean did not have the legal authority to make music or business deals on behalf of the act, and he could not use the “Jan & Dean” name . . . See Entries for February-March 1967.

• November 1966 — Reaction Records released the Ready Steady Who EP by The Who, featuring “Bucket ‘T’,” co-written by Jan Berry. Recorded in August 1966.

• December 1966 — The Ready Steady Who EP by The Who, featuring “Bucket ‘T’,” co-written by Jan Berry, reached #1 on the Record Mirror EP charts in the UK.