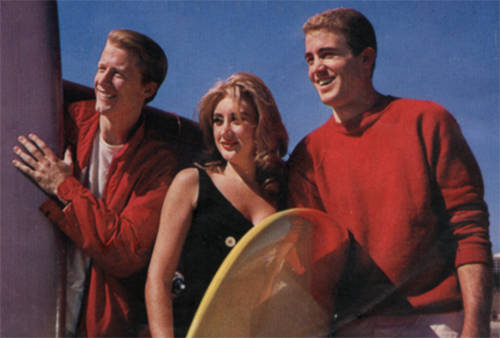 • February 1963 — Jan commissioned a pressing of his production of “Come On Baby” for Judy & Jill on the custom Festoon Records label. Other tracks Jan produced for the ladies included “What’s It Gonna Be” and “Just For Tonight.” The Judy & Jill sessions began in 1962 . . . Judy Lovejoy and Jan’s girlfriend Jill Gibson. Label design by Dean Torrence.

• March 1963 — Jan produced a session for “Surfin'” and “Surfin’ Safari” with members of the Beach Boys.

Jan Signs with Screen Gems as a Songwriter and Record Producer

• June 1963 — Screen Gems absorbed Jan’s Nevins-Kirshner contracts, updating and extending his production and songwriting agreements. It was a smooth transition and Jan was now backed by a powerful corporation. Lou Adler became head of the West Coast office of Screen Gems, where Jan and Lou served as the California extension of a heavy-weight team of writers, arrangers, and producers. Jan’s contracts allowed him to write, arranger, and produce for other artists in the Screen Gems family.

Jan Arranges and Produces for the Matadors

• July 1963 —Colpix Records released “Perfidia” / “Ace of Hearts” by the Matadors — Tony Minichiello, Vic Diaz, and Manuel Sanchez.  All three had been classmates of Jan’s at University High School. Both sides were arranged and produced by Jan Berry. Jan co-wrote “Ace of Hearts” with Gary Zekley and sang bass on “Perfidia,” which became a massive hit in the Philippines. The Matadors sang the distinctive harmonies on Jan & Dean’s Surf City and Drag City LPs in 1963, and part of the Dead Man’s Curve LP in 1964.

• September 1963 — The Surf City and Other Swingin’ Cities LP peaked on the national charts: #21 Cash Box and #32 Billboard.

• September 1963 — Having been accepted in March, Jan began classes at the California College of Medicine (now the UC-Irvine School of Medicine). When Jan attended, the campus was located on Griffin Avenue, northeast of downtown Los Angeles.

• September 1963 — Dimension Records released “Last Song I’m Ever Gonna Sing (Nashville)” / “So Used To Loving You” by Sonny Curtis. Both sides were arranged by Jan Berry, with label credit.  “Last Song I’m Ever Gonna Sing (Nashville)” was co-written by Jerry Allison, formerly of Buddy Holly & the Crickets. Curtis played and sang with the Crickets after Holly’s untimely death in 1959. Curtis’s songwriting credits include “I Fought the Law,” “More Than I Can Say,” and “Love Is All Around” (the latter from the Mary Tyler Moore Show).

Jan Writes Music for the Angels

• October 1963 — Smash Records released “I Adore Him” by the Angels, co-written by Jan Berry and Artie Kornfeld at the historic Hotel St. George in New York City.  Under the auspices of Screen Gems, the song was written specifically for this “girl group,” whose previous big hit had been “My Boyfriend’s Back.”

• November 1963 — Jan & Dean performed with the Beach Boys at the grand opening of Wallichs Music City in Redondo Beach.

• December 1963 —Colpix Records released “I’ve Gotta Drive” / “La Corrida” by the Matadors.  Both sides were arranged and produced by Jan Berry, and “La Corrida” was co-written by Jan.