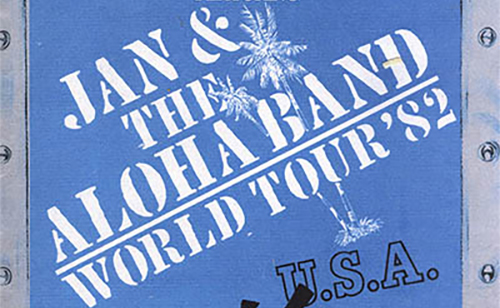 After the duo’s first successful reunion tours between 1979 and 1981, they broke up on bad terms for a couple of years. In 1982, Jan assembled a new incarnation of the Aloha Band and hit the road for a series of national tours, including a stint in Hawaii in 1983.

When Jan & Dean resumed performing again on a limited basis in 1983, Jan kept the Aloha band on call and toured with them when the duo was not performing. Jan performed with Aloha on and off through 1986 as Jan & Dean ramped up their permanent return to the road.

15 – Palladium, New York City — Murray the K’s Brooklyn Fox Reunion. Dean Torrence joined Jan and the Aloha Band for Jan & Dean’s first live performance together outside of California since Jan’s 1966 automobile accident. Also on the bill were Jay Black & the Americans, the Four Tops, the original Ronettes, and the Skyliners. Promoter: Ron Delsener.

In addition to live performances, several members of Jan’s solo bands also wrote songs and recorded with him.

Jan Berry and the Aloha Band. Live in concert, 1983 . . . In the early to mid-1980s, this band toured nationally with Jan Berry when he was not performing with Dean Torrence’s group. The video is grainy but the sound is good. The performance with a brain-damaged Jan is as good as anything Jan did with Dean's bands over the years during "Phase II" of their career. The footage reveals a high energy and accomplished ensemble that was dedicated to promoting Jan Berry following the nationally televised film “Deadman’s Curve” (1978) . . . Jan Berry’s Aloha Band: David Loe (guitar, musical director); Jim Hall (guitar) Jeff Todd (bass); Marv Allin (keyboards); Jim Ebert (drums) . . . Video courtesy of David Loe. The band was promoted by Don Podolor.

Jan Berry and the Aloha Band in concert, Northwest Tour, 1983. The video is grainy but the sound is good. This performance reveals that Jan’s solo concerts during this era were as good as anything he had done with Dean Torrence’s band between 1979 and 1981. — (courtesy David Loe)

Jan Berry and the Aloha Band in concert, Las Vegas, Nevada, 1983. The video is grainy but the sound is good. — (courtesy David Loe)