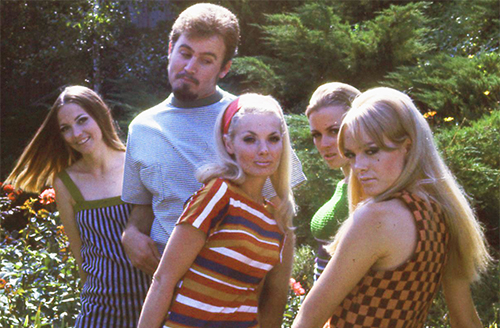 • January 1967 — Following a difficult, on-going recovery from his automobile accident Jan began gathering some of his pre-accident music tracks, including what became “Girl, You’re Blowing My Mind,” to continue working on them.

• February 1967 —The Los Angeles Herald-Examiner reported a “dramatic moment” when Jan took the stage at The Other Place, a private club in Hollywood. Jan’s friend Deane Hawley was performing and called Jan up onstage, which he accomplished “haltingly.” Jan had written the arrangements and conducted the sessions for Hawley’s “Queen of the Angels” and “You Conquered Me” (with label credit) in 1962.

• March 1967 — As with “Yellow Balloon,” Screen Gems stepped in to halt the Columbia / CBS Records release of the stereo version of Dean Torrence’s Save For A Rainy Day LP (issued as “Jan & Dean”). Dean’s self-released J&D Record Co. version of the album had already been nixed by Screen Gems in November 1966 . . . (Save For A Rainy Day was officially released by Sundazed Records in 1996).

• March 1967 — “Yellow Balloon” bubbled under at #111 on Billboard before being pulled by Screen Gems for breach of contract.

Jan Returns to the Studio

• April-May 1967 — In April, one year to the month after his automobile accident, Jan returned to the studio to begin recording his newest compositions, including “Hawaii,” “Fan Tan,” and “Love and Hate.” Jan co-wrote these songs with Don Altfeld, Jill Gibson, and his current girlfriend Jan Hirsch. Jan also produced a partial backing track for a cover of The Doors’ “Light My Fire.” Music arrangers Jan worked with during the year included George Tipton, Bill Stafford, and Robert Porter. Jan was still unable to sing at this point, and studio vocalists he employed included Glen Campbell, Ron Hicklin’s quartet, and Jill Gibson, among others.

• May 1967 — Screen Gems issued a one-year renewal of Jan’s songwriting and producer contracts with the company.

• July-August 1967 — Jan self-released two singles on his custom Jan & Dean Label . . .  “Hawaii” / “Tijuana” and “Fan Tan” / “Love and Hate.” These discs featuring unfinished tracks were halted by Screen Gems for breach of contract. However, these songs (minus “Tijuana”) would soon find an official home.

On Tour with the Monkees

• August 1967 — Jan and Davy Jones had become good friends, and Davy invited Jan to accompany The Monkees on part of the band’s 1967 North American tour. Jan didn’t perform, but the idea was to boost his moral, get him away from hangers-on, and further stoke his drive to make new music. Like Jan & Dean, the Monkees were overseen by Screen Gems.

• August 1967 — Warner Bros. Records initiated an artist contract with Jan & Dean, subject to approval by Screen Gems. After a merger during the year, the label became known as Warner Bros.-Seven Arts Records.

• September 1967 — Jan prepared for studio time under the auspices of Warner Bros. The label gave him a decent budget, but with his impaired condition he would need help to avoid the exorbitant studio costs that had plagued his recording sessions in April and May.

• October 1967 —Due to restrictions by Screen Gems regarding the Jan & Dean name, Dean Torrence released his recording of “Vegetables” under the band name The Laughing Gravy.

• October 1967 — Screen Gems approved Jan & Dean’s artist contract with Warner Bros. The three-year deal for 18 masters was revised to run through October 1970. The agreement also brought Dean Torrence in on the design end, giving him the right to select and design the album covers, subject to approval by the label.

• November 1967 — Warner Bros. Records released “Only A Boy” / “Love and Hate,” issued as “Jan & Dean.” The A-Side featured pre-accident vocals by both Jan and Dean. Jan tweaked the track after the accident, while “Love and Hate” was a  new post-accident composition and recording with little or no involvement from Dean.

• November 1967 — Dean Torrence founded Kittyhawk Graphics in Hollywood with offices on Sunset Boulevard. The Beach Boys, the Turtles, Chad & Jeremy, and the Buckinghams were among Dean’s first clients for graphics work.

• December 1967 — Screen Gems renewed and extended Jan’s artist contract with the company, to run through May 1970.

• December 1967 — As he struggled to recover from the accident and overcome his handicaps, Jan had steadily written and recorded new music throughout the year. By December 1967, his original compositions in the pipeline included “Blowing My Mind” (under various titles), “Laurel & Hardy,” “Grasshopper” (“Mulholland”), “Free, Free, Free” (“I Know My Mind”), and “Deeper and Harder” (“Carnival of Sound”), among others. “Oldies” he had been tinkering with since before the accident included “Louisiana Man,” “Stay,” “In the Still of the Night,” “Get A Job,” “Don’t Drop It,” and “Yakety Yak.”