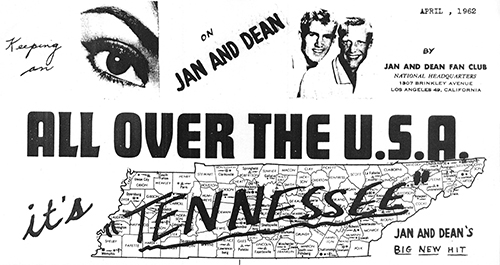 • February 1962 — The single release for “I’m Dying To Give My Love To You,” co-written, arranged, and produced by Jan in 1961 for the artist Pixie, fell through. It was reportedly slated for the Epic label.

• April 1962 — Liberty Records released “Queen of the Angels” / “You Conquered Me” by Deane Hawley. Both sides were arranged and conducted by Jan, with label credit.

• April 1962 — Liberty released “Tennessee,” which had come into the fold via Nashville songwriters Buzz Cason and Bobby Russell. Musicians on this track included Jerry Allison and Tommy Allsup. Allison had been the drummer for Buddy Holly & the Crickets, and had co-written the hit songs “That’ll Be the Day” and “Peggy Sue” with Holly. Allsup had played lead guitar on some of Holly’s recordings, including “It’s So Easy” and “Heartbeat.”

• August 1962 —By August Jan & Dean had begun performing live with the Beach Boys. Both acts appeared at the 6th Annual Reseda Jubilee, a community carnival in Reseda.

• December 1962 — With the sessions for “Linda,” Jan assumed full responsibility for producing Jan & Dean’s music. Having served in an official capacity as an arranger for Lou Adler’s productions over the past year, Jan had now moved into the top spot, per his contract with Nevins-Kirshner. From this point Jan would take Jan & Dean to new heights of success.